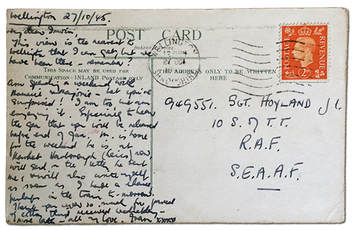 ​I started this family group after finding this postcard to Sgt. J I Hoyland on eBay. 'My dear Irwin' is James Irwin Hoyland, born 1916. Irwin's great grandfather was George HOYLAND born about 1833,  Attercliffe, Yorkshire.

In the 1861 census George’s wife was Harriet born about 1831 along with two children all born at Attercliffe.
​In the 1871 census George was listed with wife Sarah Ann born about 1841, the two children above aged 15 and 13 and a 1 year old daughter, Ada.
Also in this household was Hannah Matilda ROWBOTTOM age 8, sister in law. Several online trees have assumed that this must be Sarah’s maiden name - beware of making assumptions without following up your theory!  Using the new GRO birth indexes to look up all of George and Sarah’s children (they had 6 more after 1871) I could see that her maiden name was given as KAY for all seven children.

This family group was not as straightforward as it might first appear and led to considerable untangling to get the full picture. You would probably think from the above that George’s first wife, Harriet (nee MILLER), had died between 1861 and 1871 but no record could be found. His marriage to Sarah could not be traced either. Anyone who’s been researching their family history will know that some records can be tricky to find or may not have survived but I was puzzled that I was unable to trace either Harriet’s death or George’s marriage to Sarah Ann between 1861 and 1871. 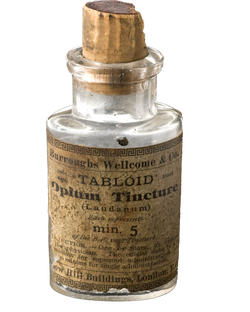 Opium tincture or laundanum was widely used in the 19th century as a pain killer or sleeping aid; it was highly addictive - © Wellcome Images and Science Museum, London
I regularly use newspapers which are often a source of information you wouldn’t find anywhere else so started to search for these people. Surprisingly, a search simply for Harriet Hoyland gave me an instant and very interesting result, here’s an extract:
​
Sheffield Daily Telegraph 2nd April 1864
A BRIGHT DAUGHTER - Harriet Hoyland alias “Laudanum Bet” a woman well known in the village of Attercliffe was brought up charged with stealing a watch, the property of her father, John Milner [sic], a cutler, living in Attercliffe. The prosecutor stated that the prisoner was separated from her husband, who allowed her 4s. a week….
…. The police gave the prisoner a very bad character, she being a woman of very drunken habits, in consequence of which her husband separated from her. She was known in Attercliffe by her alias, it having been given to her in consequence of the immense quantities of laudanum she took daily.

Nearly 30 years later the report of the coroner’s inquest told of the end of Harriet’s life:

Leicester Chronicle 29th October 1892
SUDDEN DEATH AT THE WORKHOUSE
A WOMAN WHO WOULD NOT GROW OLD
The borough coroner (Mr. Robert Harvey) held an inquest at the Leicester Union Workhouse on Wednesday evening on the body of Harriet Hoyland, who died in the Workhouse Infirmary early on Tuesday morning. - Mr Bryan, Workhouse surgeon, said he had attended the deceased since the latter part of August. She was then suffering from dislocation of the hip and fracture of the neck of the thigh bone. There were also several severe contusions, which led up to an abscess internally.
- The Coroner: Her age has been given to me as 49 - Mr Bryan: I should think she is quite 70. - Elizabeth Dallison said she resided at 31, George Street. Deceased had lived in a yard close to witness for 12 years, with a man named Wm. Lester. Her husband lived at Sheffield. Witness remembered going to deceased house one morning early in August, and she found deceased on the floor. She thought deceased had had some gin, she “used to take it.” Deceased was often the worse for drink. Deceased complained of her leg, and witness, with assistance, lifted her into an arm-chair. Soon afterwards witness heard deceased call, and on going in she found deceased had “slithered” on to the floor. Witness picked her up, and threatened “to tie her in if she did not stick in the chair.” Witness sent for the landlord of the house, and he fetched the relieving-officer and Dr. Denton. Deceased was then removed to the Workhouse infirmary.
- The Coroner: How old was she? - Witness: She never would be very old when you asked her. I should think she was about 69. She had not got a very old look. - Wm Lester, the man referred to above, was called but not sworn, and he stated that he was in the workhouse when deceased injured her thigh. He believed that she was 49 years old. - Margaret Roberts, superintendent nurse at the Workhouse infirmary, said deceased was admitted on the 5th August, suffering from injuries to the hip and thigh. She was confined to her bed till her death. She told witness that she sustained her injury by a fall from a chair. - The Coroner having summed up, the jury returned a verdict of accidental death. - The Coroner: I must ask you to find her age. The most direct evidence is that of Mrs. Dallison, who says deceased was 69 - The Nurse (recalled) stated that deceased told her that she was 51 - It was eventually decided that the age should be 69. - The inquiry then terminated.

William Lester and Harriet Hoyland can be found in 1891 in a neighbouring household to the witness, Elizabeth Dallison. In 1881 they were living as a married couple in lodgings in Leicester. They were unlikely to have been given accommodation together if it was suspected that they weren’t married. Harriet hasn’t been found in 1871 but she was not with William at that time as he was with his real wife and children.

So, Harriet didn’t die between 1861 and 1871 and in fact was still alive over 20 years later. As for George Hoyland and Sarah Ann Kay, there was no marriage to find as his wife was still living so they had to live in the pretence of being married.
Sarah was the illegitimate daughter of Ann KAY. Her mother later married Thomas Rowbottom. Hannah Matilda Rowbottom, who was with George and Sarah in 1871, was Sarah’s half sister.​